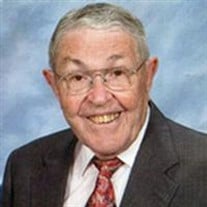 Thomas “Tommy” W. Williams, 91, died Saturday, September 19, 2015 at Good Samaritan Center, Liberal, KS. He was born September 27, 1923 in Minneola, KS, the son of Earl and Opal (Crecilius) Williams. He graduated from Tyrone High School, Tyrone, OK in 1941. He served with the US Navy from 1943 to 1945 on the USS Anzio aircraft carrier during WWII.He was employed with Panhandle Pipeline Company as an operations administrator until Anadarko was started. He was one of the first 5 employees at Anadarko and retired in 1985. He was a member of the First Baptist Church, Life member of the VFW, International Order of Odd Fellows where he served as the Kansas State IOOF Grand Master. He was president of the Liberal Garden Club. He propagated Irises and had over 90 varieties in his yard. He also was a member of the Noon Kiwanis Club and he was very active with Kids, Inc. and ran the concession wagon for many years. He loved traveling and visiting his children and attending ship reunions. On Feb. 20, 1952, he married Shirlene Wheeler in Turpin, OK. She died Aug 7, 1987. Survivors include:1 Daughter Kelleen Williams of Lakewood, CO.1 Son Kyle Williams of Tulsa, OK1 Brother James “Sam” Williams of Salem, ORHe is preceded in death by 2 Brothers, Ralph Williams and Donald LaMont Williams and 2 Sisters, Electa Elizabeth Rahm and Margaret Fronk. Memorial service will be held at 2 pm Tuesday, September 22, 2015 at Brenneman Funeral Home Chapel with Rev. Stan Lehnert presiding. A private family burial will be held at Liberal Cemetery. Visitation time will be from 5 to 8pm Monday at Brenneman Funeral Home. Memorial Contributions may be sent to Kids, Inc. in care of Brenneman Funeral Home 1212 W. Liberal, KS 67901.

The family of Thomas W. Williams created this Life Tributes page to make it easy to share your memories.

Send flowers to the Williams family.