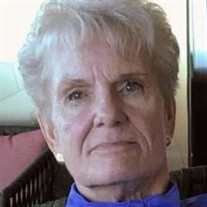 Vera J. Browne age 85, died Tuesday, March 9, 2021 at Brookdale Liberal Springs in Liberal, Kansas. She was born on July 30, 1935 the daughter of Chester and Iris (Mendenhall) Southern in Hooker, Oklahoma. Vera graduated from Eureka High School in Baker, Oklahoma and went on to become an accountant for the grocery industry. She married Jerry Browne on November 14, 1953 in Liberal. They were married 51 years until his death on November 21, 2004. Together they raised 1 son, Douglas Browne and 1 daughter, Janelle Browne. Survived by: Her son, Douglas of Liberal, Kansas Her daughter, Janelle and her husband, Mark Robichaud of Colleyville, Texas Her sisters, Juanita Grant also of Liberal and Sonia Davis of Richfield, Kansas She was preceded in death by both her parents, Chester and Iris Southern, her brother, Leon Southern, brothers-in-law, Chet Grant and Robert Davis Visitation will be from 1:00 PM – 5:00 PM Sunday, March 14, 2021 at the Hornung Family Funeral Home 1212 W. 2nd Street Liberal, Kansas. Funeral Service will be at 2:00 PM on Monday, March 15, 2021 at the Hornung Family Funeral Home 1212 W. 2nd Street Liberal, Kansas. Interment will follow at the Liberal Cemetery. Memorial donations suggested to The Michael J. Fox Parkinson’s Foundation in care of Hornung Family Funeral Home. Condolences may be sent to the family at www.hornungfuneralhome.com

The family of Vera J. Browne created this Life Tributes page to make it easy to share your memories.

Send flowers to the Browne family.