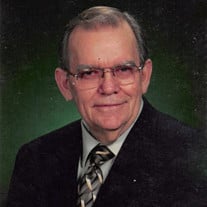 Rev. Victor ‘Ray’ Tweed, 87, went to be with the Lord Wednesday, September 30, 2020 at the Good Samaritan Society Nursing Home in Liberal, KS. He was born on March 27, 1933, in St. Paul, AR, the son of Graydon Scott and Esther (Bivins) Tweed. He graduated from North Side High School in Fort Smith, AR in 1951. As a teenager, her surrounded his life with the ministry. He graduated from Southern Baptist College at Walnut Ridge, AR, where he met his soulmate, Mary Ellen Picket. They were married in her home church on June 15, 1952. From there he went to Ouachita Baptist College and then on to Arkansas State University. He graduated with degrees in Education, Mathematics and Music. Ray was a church pastor with Southern Baptist Churches. He served 18 years in Arkansas and Missouri. He then moved to Kansas. He first served the Southern Baptist Home Mission Board (now the IMB) in Goodland. He then served as pastor at the First Southern Baptist Church in Satanta, which was one of his greatest blessings. Ray also taught math in Blytheville and Manila, AR and at West Jr. High in Liberal. He retired in 2004. He was in the ministry in Kansas for 50+ years. He was a member of the Liberal First Southern Baptist Church, a volunteer at SWMC and Senior Site where he drove bus. He was also a member of the Satanta Lions Club. He was also an EMT, and was the 1st announcer on KHYM radio. One of his greatest joys was helping people and volunteering in any way he could. Survivors include: His Wife of 68 years, Mary Ellen Tweed Liberal, KS Son Victor ‘Vic’ Ray Tweed II San Diego, CA Daughter Teresa Tweed Louisville, KY Sister Mildred Jackson Aurora, CO 4 Grandchildren Matthew Foster of Florida, Ben Rupp of South Carolina, Tom Rupp of Italy and Jo Rupp of Louisville. One great grandson Sam Rupp and one great granddaughter Liana Foster. Ray was preceded in death by his parents and his in-laws, Arthur and Rhoda Pickett. Visitation will be on Wednesday, October 7, 2020 from, 9am to 8pm at the Hornung Family Funeral Home. The family will be present to greet friends from 6pm to 8pm. Funeral Services will be 1pm Thursday, October 8, 2020 at the First Southern Baptist Church in Liberal, with Pastor Randy Caddell presiding. Burial to follow at Liberal Cemetery. Memorial contributions may be sent to the First Southern Baptist Church, in care of the Hornung Family Funeral Home 1212 W. 2nd Liberal, KS 67901. The family requests that masks be worn by all guests during both the visitation and service. They also request that we maintain social distancing, in the interest of protecting everyone. Condolences may be sent to the family at www.hornungfuneralhome.com

The family of Rev. Victor Ray Tweed created this Life Tributes page to make it easy to share your memories.

Send flowers to the Tweed family.