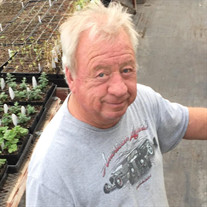 Wayne Edward Gray, age 73, passed away Saturday, May 22, 2021 in Liberal, Kansas. On July 18th, 1947, Herbert and Izetta (Swiger) Gray were speeding to the Perryton, Texas hospital. Expecting their first baby the young couple made it...almost. When the old car hit the railroad tracks on the north side of Perryton a little too hard, Wayne Edward Gray was born. Wayne's happy childhood was spent in Liberal where he graduated with the class of 1965. He attended K-State but was drafted into the US Army where he proudly served with the 7th Cavalry. Wayne was sent to Fort Mead, afterwards to Germany, then onto Vietnam. After being discharged, he re-enrolled in college graduating from Denver College, returning to Liberal. Realizing he had a gift for sales, Wayne began selling carpet for Sears and Roebuck. He then discovered the world of radio sales working for both KLIB and KSCB where he retired in 2016 after 30 years. Retirement, however, was short lived. In 2017, the Gray’s purchased the former Mayhan's Garden Center renaming it the Flower Coop. There he served as chief popcorn popper and potting soil retriever often complaining about working for a bunch of demanding women. Wayne married Kay Hazzard in 1972. They later divorced. On July 19, 1986, Wayne married Lidia Hook. She survives. Wayne obtained his private pilot’s license in 1980. He loved giving his daughter and friends rides and was most proud of the flight he was able to give his Dad. He will always be remembered as the best steak griller this side of the Mississippi and was also known as KSCB's "Waynegauge" giving the latest, accurate reading of the local rainfall. He was crazy about Corvettes, Cessnas and Camaros, enjoyed watching the stockmarket and loved spending time in his backyard with best dog Roscoe. He is survived by his beautiful daughter, Amanda (David) Ireland, grandchildren Bailey and Ryder, all of Turpin, Oklahoma. Sisters Connie (Chuck) Bowman of Liberal, Kathy (Sean) Tiffany of Golden Colorado. Sister-in-law, Ellen Pelton, of Turpin, Oklahoma. Wayne is also survived by his beloved nieces, Kelly (Mike) Hornung, April Bowman, Christina (Graham) Parr, Kara Pelton and Rami (Marc) Cox. In addition, he is survived by his lifelong buddies, Jerry Easley, Bill and Sandy Bondurant, Danny and Sharon Abrams and favorite dog, Roscoe. Wayne was preceded in death by both his parents, Herbert and Izetta Gray and his Aunt Ardella Swiger Visitation will be from 10:00 AM – 7:00 PM on Thursday, May 27, 2021 at the Hornung Family Funeral Home 1212 W. 2nd Street Liberal, Kansas Funeral Service will be 10:30 AM on Friday, May 28, 2021 at the Hornung Family Funeral Home 1212 W. 2nd Street Liberal, Kansas with Reverend Jeff Mitchell presiding. Private family Inurnment will take place at a later date. Reception following services will be at the St Andrews Episcopal Church 521 N. Sherman Avenue Liberal, Kansas Memorial donations suggested to All Faith Ministries of Hooker, Oklahoma or Seward County Historical Society in care of Hornung Family Funeral Home. Condolences may be sent to the family at www.hornungfuneralhome.com

The family of Wayne Edward Gray created this Life Tributes page to make it easy to share your memories.

Send flowers to the Gray family.