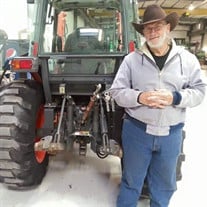 William Jan Proctor, age 69, died April 21, 2017 at Homestead Estates Home Plus in Liberal, KS. He was born November 22, 1948 in Hutchinson, KS, the son of William Harold and Helen Mae (Murry) Proctor. He graduated from Liberal High School in 1966. He graduated from Southwestern College at Winfield, KS with a teaching degree in English. On October 19, 1973, he married Billie Jean Searcy at Perryton, TX. She survives. He worked Northern Natural Gas Company where he was an agent/ buyer of right of ways. He commenced working in a compressor station in Beaver, OK, then he worked in the Safety Department and lastly as an agent/ buyer of right of ways in Omaha, Nebraska. He worked for Williams Telecommunications, in their fiber optics department in Des Moines, Iowa. He moved back to Liberal in 1998, where he worked for GPM Company. Then he was rancher raising Quarter Horses. He was a member of the Liberal National Guard, Right of Way Association, and the Seward County Farm Bureau Association. Survivors include 1 Son Paul Proctor and wife Mary Ann Humboldt, TN 1 Daughter Starla Young and husband Bryan Liberal, KS 1 Sister Gay Lynn Lillagore Sequim, WA 5 Grandchildren Joshua Mitchell, Dylan Ketcherside, Christie Jo Proctor, Jesse W. Proctor and Logan Proctor. He was preceded in death by his Parents, 2 Aunts Jess Matkin, Mildred Roe and 1 Uncle Paul Matkin. Memorial service will be 11:00 am, Wednesday April 26, 2017 at the First United Methodist Church in Liberal, KS with Pastor Keith Anglemyer presiding. Cremation has taken place and there will be no visitation. Memorial contributions may be sent to the First United Methodist Church in care of the Brenneman Funeral Home 1212 W. 2nd Liberal, KS 67901.

The family of William Jan Proctor created this Life Tributes page to make it easy to share your memories.

Send flowers to the Proctor family.