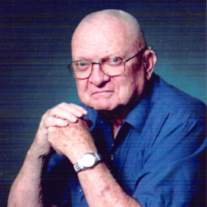 He graduated from Hoisington High School at Hoisington, KS in 1955. He attended the Seward County Community College Vocational Technical School.

He worked Panhandle Eastern Pipeline Company and USD-480 as a warehouseman. He was a member of the First United Methodist Church, P.E.P.L. Retired Employees, Liberal American Legion Post #80, the Golden Band Sunday School (SOC) and a former member of the Early Risers Kiwanis.

He was preceded in death by his Parents, 2 Brothers Maurice D. Smith and Sidney G. Thayer.

Funeral Service will be 10:00 a.m., Friday, April 20, 2018 at First United Methodist Church, in Liberal, KS, with Pastor Keith Anglemyer, presiding. Burial will be in the Liberal Cemetery with Military Honor provided by the Liberal American Legion Post #80.

Visitation will be 9:00 am to 8:00 pm Thursday at Brenneman Funeral Home with the family present to greet friends from 6 – 7:30 PM.

Memorial contributions may be sent to the First United Methodist Church or SCCC/ATS Development Foundation in care of the Brenneman Funeral Home 1212 W. 2nd Liberal, KS 67901.

To order memorial trees or send flowers to the family in memory of Albert G. Thayer, please visit our flower store.