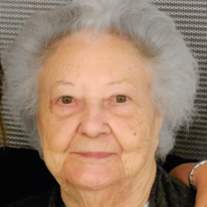 She worked at Independent Hardware and Lullaby Lane as a sales clerk. She was the owner and operator of Matkin Liquor Store in Liberal.

She was preceded in death by her parents, 1 Brother Charles E. Taylor, and 1 Sister Joyce Birkley.

In lieu of services, a visitation will be 9am to 8pm Wednesday, November 28, 2108 with the family present from 5pm to 8pm at Brenneman Funeral Home to greet friends and celebrate Ann’s life.

A private family inurnment will take place at a later date.

Memorial contributions may be sent to the Alzheimer's Association, in care of the Brenneman Funeral Home 1212 W. 2nd Liberal, KS 67901.

To order memorial trees or send flowers to the family in memory of Ann Matkin, please visit our flower store.