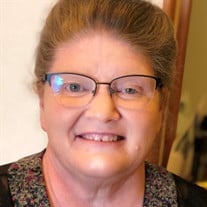 Anna Irene Newport, age 57, died April 23, 2021 at her home in Turpin, Oklahoma. She was born on September 23, 1963 the daughter of Ralph LeRoy Lofland and Bess Carlene Crossley in Wichita Kansas. She was raised by her loving adoptive family. Anna reconnected with her biological family in 2014. Anna graduated Liberal High School in 1981 and attended Seward County Community College. She married her long-time friend and love, Michael, on February 18, 1994. Together they raised their beautiful daughter, Emmalee. Anna worked at SWMC for 38 years from 1980 to 2018. She worked as a ward clerk on the Surgical floor and then worked in the pharmacy as a pharmacy technician. This was her first and only place of employment. Many life-long friends were made during these years. She belonged to a non-denominational faith, whose ministry follows the teachings of Jesus. The love she had for her faith was evident in the way she lived her life. She is known for her baking skills, which included her sugar cookies, Key Lime Pie and many other desserts. Also known for always being there for anyone and everyone. Anna had the gift of writing and conversing to everyone. She enjoyed hosting company and entertaining. She will be dearly missed and forever in our hearts. Anna is survived by Husband Mike Newport of Turpin, Oklahoma. Daughter Emmalee Newport and Husband Thomas Kuns also of Turpin. Mother Donna Garner-Shughart of Meriden, Kansas. Siblings Sisters: Tammy Davis and Husband Dwayne Davis of Meriden, Kansas. Amy Garner of Meriden, Kansas. Brother: James Garner of Topeka, Kansas. Many cousins, nephews, nieces and an abundant number of Friends. She was preceded in death by adoptive parents Ralph and Carlene Lofland. Biological father William Garner. Brother Dan Lofland. Infant Sister Ester Lofland. Visitation will be 1:00 PM – 7:00 PM on Thursday, April 29, 2021. The family will be receiving guests from 5:00 PM – 7:00 PM. Funeral Service will be 10:00 AM on Friday, April 30, 2021at the Hornung Family Funeral Home 1212 W. 2nd Street Liberal, Kansas. Interment will follow at the Liberal Cemetery. Memorial donations suggested to the charity of your choice in care of Hornung Family Funeral Home. Condolences may be sent to the family at www.hornungfuneralhome.com -
To order memorial trees or send flowers to the family in memory of Anna Irene Newport, please visit our flower store.