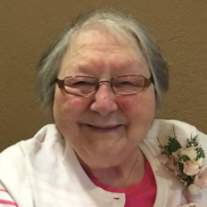 On November 13, 1954 she married Wesley Duland Wells at Clayton, N.M. They were married for 64 years. He survives

She worked at Independent Hardware, in Liberal, KS, as a residential decorate sales representative.

She enjoyed spending time with her husband, children, grandchildren and family. She loved birds and hearing them sing. Her goals were to see her grandchildren become grown. Her heart was pure and full of love and always said, “I need a hug” and “a bushel and a peck and a hug around the neck”. She had the best laughter. She pretended that she couldn’t hear her family, so she could have them come and sit with her.

Funeral service will be 10:00 a.m., Wednesday, March 13, 2019 at Brenneman Funeral Home Chapel with Pastor Rex Petty, presiding. Burial will be in the Elmhurst Cemetery in Guymon, OK.

Condolences may be sent to the family at www.brennemanfuneralhome.com
In lieu of flowers, memorial donations can be made to The American Heart Association, The American Cancer Society, or The American Diabetic Association, in care of the Brenneman Funeral Home 1212 W. 2nd Liberal, KS 67901.

To order memorial trees or send flowers to the family in memory of Anna Beatrice Wells, please visit our flower store.