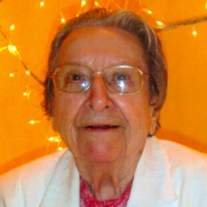 Barbara Ann (Steele) Heng, 90, passed away January 27, 2020 at Our Lady of Mercy Country Home in Liberty, MO, where she resided since June, 2008. She was a former longtime resident of Liberal, KS.
Barbara was born June 2, 1929, in Tyrone, OK, one of eight children of Robert John and Nina Belle (Lutes) Steele. She received her degree as a Registered Nurse in 1949 from St. Francis School of Nursing in Peoria, IL. Barbara was united in marriage to Ralph Vincent Heng on August 8, 1950. They were married 54-plus years until his death in 2005.
Barbara spent her working career as a registered nurse and from 1954 to 1980 as co-owner of Tri-State Communications Company in Liberal with Ralph. She was a member of St. Anthony Catholic Church in Liberal and was a very active member of the Catholic community and a volunteer at Our Lady of Mercy.
Along with her parents and husband, Barbara was preceded in death by three sisters: Verlee Hanley, Verla Dowell and Patricia Thomas; and a brother, Ben Steele.
Survivors include her children: Sharon Martin (Jerry) of Manhattan, KS, Karen Todd (Fred deceased) of Carmel, IN, Marilyn Williams (Steve) of Kansas City, MO and Ralph "Mike" Heng (Tonia) of Waukesha, WI; siblings: Sue Snodgrass of Joplin, MO, Robert Steele Jr. of Denton TX, and Hjordis Garrison of Sayor, OK. She also leaves seven grandchildren, thirteen great grandchildren, five great-great grandchildren, and many nieces, nephews, other family members and friends.
Visitation will begin at 9:30 am, Rosary at 10:00 am, and Mass of Christian burial at 10:30 am, on Thursday, January 30, in Tighe Hall at Our Lady of Mercy Country Home, 2115 Maturana Drive, Liberty, MO 64068. In lieu of flowers, please consider a donation in Barbara's memory to Our Lady of Mercy Country Home, in care of Brenneman Hornung Family Funeral Home, 1212 W 2nd St., Liberal, KS 67901. Graveside services will be held at 2:00 pm Friday, January 31, at Restlawn Memorial Gardens in Liberal, KS. A message of condolence for the family can be left at www.brennemanfuneralhome.com.

To order memorial trees or send flowers to the family in memory of Barbara Ann Heng, please visit our flower store.