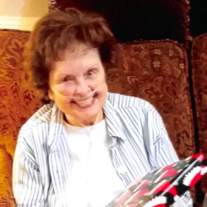 She was born on August 9, 1934 in Las Vegas, New Mexico, the daughter of Philip and Mabel (Bennett) Schultz.

She graduated from Liberal High School, and then attended Beauty School in Dodge City.

Betty was a lifetime member of the PTA. She loved her family, and loved to babysit her grandchildren.

3 grandchildren
Komal Hanna, Chris Swanson and his wife Haley, and Amber Engelman and her husband Brandon.


She was preceded in death by her husband, her parents, 2 brothers: Charlie Schultz and Ronald Dean Schultz; 2 sisters, Reva Reffitt and Jody Salley; and one grandson Darien Hanna.


Memorial Contributions may be made to the Faith Tabernacle Church in care of Brenneman Funeral Home, 1212 W. 2nd Liberal, KS 67901.

To order memorial trees or send flowers to the family in memory of Betty Lou Hanna, please visit our flower store.