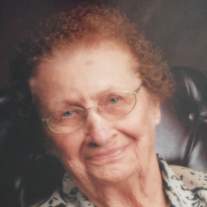 Beulah Louise King, age 95, died Thursday February 23rd, 2017 in Broken Arrow, Oklahoma.
She was born July 1, 1921, to Carl and Adelia (Hackerott) Miller in Natoma, Kansas.
Beulah was married February 19th, 1946 to Willard H. (Bud) King, who preceded her in death, as did her parents and only sister Grace and son in law, Buster Keeton.

Beulah was a long time Liberal, Kansas resident who started Kings BarBQ. She is survived by her daughters Connie Keeton of Edmond, OK and Norma Leaman (Steve) of Broken Arrow, OK. Sons Gary King (Kim) of Bixby, OK and Wayne King (Andrea) of Denver, CO also survive as do 11 grandchildren and 11 great-grandchildren.

Beulah was a life-long animal lover and the family suggests memorials be donated to Liberal Animal Shelter in care of Brenneman Funeral Home, in lieu of flowers.

Visitation will be 7:00 to 9:00 pm Monday at Brenneman Funeral Home.

To order memorial trees or send flowers to the family in memory of Beulah Louise King, please visit our flower store.