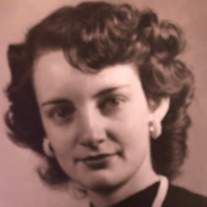 Beverly Jean Kilgore died February 3, 2020 at Liberal Good Samaritan Society, in Liberal, Kansas.
She was born on May 30, 1932 in Tyrone, Oklahoma to Basel and Velma Albright (Wadley). She attended Tyrone Schools and graduated from Tyrone High School.
Beverly married James Elton Kilgore (Jim) in the Tyrone Baptist Church on January 28, 1951. Jim preceded her in death in 1985.
Beverly was a resident of the Liberal Good Samaritan Society for twenty years. She lost the use of her legs many years ago, but never lost her positive outlook on life and loved to watch sports on television.
She was preceded in death by her husband, her parents, a sister, Janet Albright, a brother, Bryon Albright, and a son-in-law, Larry Howell.
Beverly is survived by a daughter, Jamie Howell, Olathe, Kansas, four grandchildren, and six great grandchildren.
Cremation has taken place. The memorial service for Beverly Jean Kilgore Memorial Services which were scheduled for May 29th, 2020 at the Liberal Good Samaritan Society will be cancelled due to the current Covid19 Virus situation. A service may be rescheduled at a later date to be determined.
Memorial Contributions may be sent to Good Samaritan Society, Liberal, Kansas, in care of Brenneman Funeral Home, 1212 W. 2nd St. Liberal, Kansas 67901.

To order memorial trees or send flowers to the family in memory of Beverly Jean Kilgore, please visit our flower store.