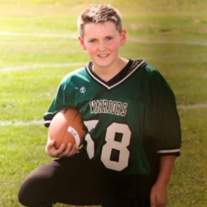 Brett Michael was kind-hearted and compassionate when it came to everyone around him. He was a member of the National Junior Honor Society at Eisenhower Middle School. He loved playing football and video games. He enjoyed spending time with his friends, family, and pets.

Memorial contributions may be sent to the Brett Cunningham Memorial Fund in care of the Brenneman Funeral Home 1212 W. 2nd Liberal, KS 67901.

To order memorial trees or send flowers to the family in memory of Brett Michael Cunningham, please visit our flower store.