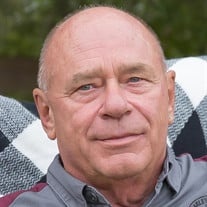 Carl L. Schartz, 67, passed away on June 28, 2021, at his home in Corinth, Texas after an extended battle with lung cancer. Carl was born on May 27, 1954, in Dodge City, Kansas to Mark and Betty Schartz. He grew up on the family farms in Ellinwood and Cimarron, Kansas. He graduated from Cimmaron High School in 1972. Carl earned a Certificate in Diesel Technology and later, a Certificate in Electronics Technology from Southwest Kansas Technical School in Liberal, KS. On January 14, 1977, Carl married Pamela K. French at St. Anthony Catholic Church in Liberal, Kansas. The couple resided in Liberal until Carl retired from the oilfield in 2019 and they relocated to Corinth, Texas to enjoy their grandchildren and the warmer climate. Carl had many hobbies and interests and was said to have loved anything with a motor. He was an avid Harley Davidson rider and loved building, flying, and driving his many radio-control airplanes, helicopters, drones and cars. Carl is survived by his wife Pam Schartz; son Arron Schartz and wife, Nicole; grandsons Phoenix and Memphis Schartz, all of Corinth, Texas; sisters Marian Reynolds, Pittsburg, Kansas; Donna Woods, Cimarron, Kansas; Bernice (David) Rebein, Dodge City, Kansas; and Rita (Bill) Hommertzheim, Cimarron, Kansas and brothers David Schartz, Garden City, Kansas; Steve (Sara) Schartz, Cimarron, Kansas; and Brian Schartz, Dodge City, KS and mother-in-law Lucille French-Andra (Kenneth Andra), Conway Springs, Kansas. Predeceased by parents, Mark and Betty Schartz; brother-in-law, Rusty Woods; father-in-law Max French and granddaughter, Rolla Schartz. A funeral mass will be held at 10 AM on Thursday, July 8, 2021 at St. Anthony Catholic Church at 1510 N. Calhoun Avenue in Liberal, Kansas. A private family service and interment will follow at the Belpre Catholic Cemetery in Belpre, Kansas. In lieu of flowers, the family requests memorials to VNA Hospice Care, 2800 Shoreline Dr, Ste 250, Denton, Texas 76210 (phone 940-349-5900) in appreciation of the incredible work they do and the help and comfort they have provided both to Carl and to Pam. Condolences may be sent to the family at www.hornungfuneralhome.com
To order memorial trees or send flowers to the family in memory of Carl L. Schartz, please visit our flower store.