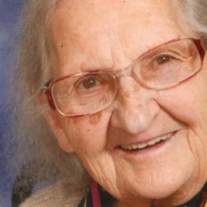 Clarabelle Palmer, age 94, died May 19, 2017 at Wheatridge Park Care Center in Liberal, KS. She was born January 20, 1923 in Stevens County, KS, the daughter of Charlie and Ova (Lawson) Massa. She had been a resident of Liberal for over 80 years.

She was a homemaker.

She attended the New Beginning’s Church.

She was preceded in death by her parents, 1 Son Kenneth Palmer and 2 Brothers Alvin and Bethel Massa.

Funeral service will be 10 a.m. Wednesday May24, 2017 at the New Beginnings Church with Pastor Kevin Alexander, presiding. Burial will be in the Liberal Cemetery, Liberal, KS.

Visitation will be Monday May 22nd from 1 to 5 p.m. and Tuesday May 23rd from 9 am to 8 p.m. with the family present from 6 to 7 p.m. at Brenneman Funeral Home to greet friends.

Memorial contributions may be sent to the New Beginnings Church or Wheatridge Park Care Center in care of the Brenneman Funeral Home 1212 W. 2nd Liberal, KS 67901.

To order memorial trees or send flowers to the family in memory of Clarabelle Palmer, please visit our flower store.