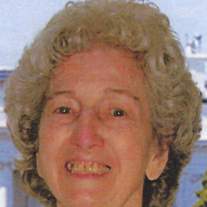 She was born January 10, 1925, in Follett, Texas, the daughter of Charlie Harper and Jewell Ila (Burke) Allen. Cleta graduated from Beaver High School in 1941.

She drove a school bus for Beaver Public School for several years, was a nurse’s aide at the Beaver County Hospital for 10 years, and a homemaker in her own home, so as to be close to her children as they were growing up.

Cleta was a dedicated fan of the Denver Broncos and huge fan of John Elway. She would not be bothered when they were playing on TV. She was a wonderful cook making the best homemade noodles and then preparing delicious turkey noodles for holiday meals. She enjoyed canning and making sand plum jelly and strawberry preserves from the beautiful garden she worked so hard on every year, with the help of her husband Tom. Even though her family was most important to her, she loved beating then at Wahoo, a board game with dice and marbles. Her favorite time was spent with family.

Cleta was the beloved Mother of her son Gary Rock of Vancouver, Washington and daughters Diana Rock of Greenbelt, Maryland, Jo Ann Olsen and her husband Tom of Wichita, Kansas, Denise Boyd and her husband Ron of Turpin, Oklahoma and Judith Clifford and her husband Patrick of Katy, Texas.

Cleta has one surviving brother, Rich Allen and his wife Sharon of Salt Lake City, Utah.

Cleta was preceded in death by her parents, husband Thomas and son Thomas E. Rock, Jr.

Cremation has taken place so there will no visitation.

Memorial Services will be 10:00am, Saturday, August 24, 2019 at the Brenneman Funeral Home, 1212 West 2nd Street, Liberal, Kansas, with Pastor Stan Lehnert officiating.
The Committal of cremated remains will be at 2:00pm in the Pioneer Cemetery in Beaver, Oklahoma.
The family will receive friends immediately following the committal service at the First Baptist Church in Beaver.

To order memorial trees or send flowers to the family in memory of Cleta Fae Rock, please visit our flower store.