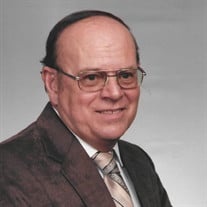 Leon Onions, 93, died Sunday, June 26, 2022 at Wheatridge Park Care Center in Liberal, Kansas. He was born Clifford Leon on August 13, 1928 to John W (Bill) Onions and Freda (Eldridge) Onions in Liberal, Kansas. He married Frances Louise Long on April 1, 1977 in Washington, Pennsylvania. She preceded him in death in 2001. He graduated from Liberal High School in 1946 and then later from Oklahoma State University with an Associates degree. Leon served in United States Army during the Korean War and retired from the Reserve Forces as a First Sergeant in 1981. He worked as a leased circuit serviceman for AT&T and retired with 38 years of service. During those years, he was a member of the Telephone Pioneers of America, a community service organization and was president of the Southern Council of Kansas. He liked to travel together with his wife, and also with groups, they visited many overseas locations of interest and enjoyed several ocean cruises. With the Liberal Camping Club they visited many wonderful destinations. He was a member of Elks and the First Presbyterian Church of Liberal and served as an elder and a deacon. His hobbies included photography and travelling with his family and friends. Leon is survived by many nieces, nephews, grandnieces, grandnephews, also great and great-great grandnephews and grandnieces. He was also preceded in death by his parents, sisters Donna Marie Kauffman and Vesta Jean Brennan and brother Bill Onions. A visitation will be held at Hornung Family Funeral Home, 1212 W 2nd Street in Liberal on Wednesday, June 29 from 1:00PM till 7:00PM. Family will receive friends from 6:00PM – 7:00PM. Funeral services will be at 11AM on Thursday June 30, 2022, at the First Presbyterian Church of Liberal, 1551 N Western Ave with Pastor Rex Petty presiding. Interment to follow at Liberal Cemetery. Memorials may be made to the Deacons Fund of the First Presbyterian Church of Liberal, in care of Hornung Family Funeral Home, 1212 W 2nd Street, Liberal, KS 67901. Condolences may be sent to the family at www.hornungfuneralhome.com
To order memorial trees or send flowers to the family in memory of Clifford Leon Onions, please visit our flower store.