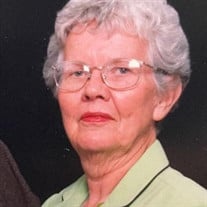 Cora “Oletta” Leonard, age 93, died Saturday, September 17, 2022, in Midwest City, Oklahoma. Oletta was born on August 11, 1929, the daughter of Donald M. and Emma C. (Cook) Smith in the small town of Hominy, Oklahoma. She grew up with not only lots of childhood friends, but lots of family in the home as well – she was one of eleven children. As they became adults most of her siblings dispersed across the states. This includes Oletta, who moved to Liberal, Kansas with her husband John and ended up staying there for over 50 years. But she stayed close to her brothers and sisters throughout her life, often visiting them on her own family vacations over the years. Oletta and John adopted a son, James, who has been the apple of Oletta’s eye his entire life and whom she has always been fiercely protective of. She loved taking care of family and looking after them and spent the majority of her time doing so. But one of her favorite ways to show her love for her family and for others was through food, and she made sure there was always plenty of it. From homemade macaroni and cheese to enchilada casserole, there were certainly lots of recipes to choose from and no one went away hungry. But the piece de resistance, the one recipe she gave out but no one could ever seem to truly replicate them, is her chocolate chip cookies. Always requested by her family, friends, church and events she attended, the chocolate chip cookies are a staple in her baking arsenal and often referred to by those who have had them as the World’s Greatest. Oletta attended Baptist churches all of her life and is also a member of the Eastern Star, where she regularly attended their meetings and ceremonies. While her personality leans toward the more serious side, she also loves Hee Haw and watched Wheel of Fortune and any Western show when she got the chance. She would also keep up with Ann Landers in the newspaper and the magazine Guidepost and will always listen to gospel music or the music of Blake Shelton. Oletta worked as a babysitter on and off for many years while she was caring for her family and also put her baking skills to work as a baker at a couple of grocery stores in Kansas. But her family always came first. In addition to her son, she now has two grandchildren, and the family regularly came to her home to have dinners. On Christmas Eve the family tradition was to always have pizza and enjoy each other’s company. Oletta is a loving, caring soul who can be generous to a fault and always loves to put others first. She is a beautiful representation of lavishing love on family and finding specific ways to showcase that love over and over again – through her time, through her frequent visits over the years and through her wonderful cookies. Survived by Her son, J.D. Leonard (Leslie Kilgore) of Norman, Oklahoma Three brothers, Raymond B. Smith (Dorothy) of Yukon, Oklahoma John W. Smith (Susie) of Ada, Oklahoma and Jerry D. Smith of Florence, Colorado Two sisters, Virgina Todd (Lloyd) of Sheridan, Wyoming, and Crystal Hutlas (Ed) of Dallas, Texas Two grandchildren, and Four great grandchildren. Preceded in death by Her husband, Johnie L. Leonard, Both parents, Donald M. and Emma C. (Cook) Smith, Stepmother, Mittie K. Smith Four brothers, Charles E. Smith, Carl D. Smith, Warren Crain, and Ronald Crain, One sister, Lavell Hudson and Two sisters-in-law, Helen Crain, and Mona Smith Visitation will be 9:30 AM – 11:30 AM on Thursday, September 22, 2022, at the Hornung Family Funeral Home, 1212 W. 2nd Street, Liberal, Kansas. Graveside Service will be 2:00 PM on Thursday, September 22, 2022, at Restlawn Cemetery. Rev. Rex Petty presiding. Memorial Donations suggest to Faith Tabernacle Church in care of Hornung Family Funeral Home, 1212 W. 2nd Street, Liberal, Kansas. Condolences may be sent to the family at www.hornungfuneralhome.com Hornung Family Funeral Home, 1212 W. 2nd Street, Liberal, Kansas
To order memorial trees or send flowers to the family in memory of Cora Oletta Leonard, please visit our flower store.