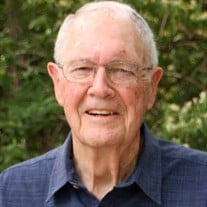 Dannie Keith Clodfelter, 86, left on a fishing trip with the world’s greatest Fisherman on July 15, 2022, from his home in Hutchinson, Kansas. He was born March 11, 1936, to Cline and Dollie Clodfelter. He was united in marriage 66 years ago to his high school sweetheart, Rozelle Kay Headrick, at Kismet, Kansas. Dannie enjoyed a long and distinguished career as an educator in Kansas. He taught and coached at Linwood, was principal of the high school at Baldwin City, and became a superintendent of schools at Pretty Prairie when unification was initiated in Kansas. He also served as superintendent of schools at Cherryvale and retired as superintendent after 18 years at Meade. Left to continue his legacy are his devoted wife, Kay: daughter and husband, Denise and Ron Beutler of Clay Center; son and wife, Mark and Diann Clodfelter of Greensburg. His wisdom and competitive spirit will continue with his grandchildren: Bridget (Beutler) and Justin Hancock, Eli and Isaiah; Joshua and Dura Clodfelter; Adam and Caley Beutler, Calvin, Juniper, Leo, and Rosalie; Spencer Clodfelter and Jess Stewart, Ella; Kaylee (Beutler) and Benjamin Digby. He is also survived by his only sibling, a younger brother and wife, Boyd and Donna Clodfelter. Funeral services will be held Saturday, July 23, in the Chapel at Hornung Funeral Home, Liberal, Kansas, with visitation from 2:00 - 4:00. A Celebration of Dannie’s Life will begin at 4:00 with burial following immediately at Restlawn Cemetery. Because of Dannie’s faithfulness to Crosspoint Church, Hutchinson, even in a wheelchair, the family suggests memorials be made in his name to Crosspoint Church to be used for the Faris School Project in care of Hornung Funeral Home, 1212 W. 2nd St., Liberal, KS 67901. A donation to a charity of the donor’s choice would also be welcomed. Condolences may be sent to the family at www.hornungfuneralhome.com Hornung Family Funeral Home, 1212 W. 2nd Street, Liberal, Kansas
To order memorial trees or send flowers to the family in memory of Dannie Keith Clodfelter, please visit our flower store.