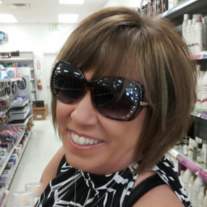 She was born on October 4, 1954 in Oklahoma City, Oklahoma, to William and Mary (Grisham) Davidson.

On September 30, 1991 she married Randy Schmitzer in Grand Junction, Colorado. He survives.

She graduated from Northwest Classen High School in Oklahoma City in 1972. She then graduated from the Kenneth College of Hair Design in Liberal in 1981, and from Clarksburg Beauty Academy in Clarksburg, WV in 1982.

She worked for Regis Hairstyle Salon for 13 years, and then as a National Certified Pharmacy Technician at Dillion Pharmacy.

She was a member of Believer’s Ministry Church, Miss America Pageant Board, and president of Little Miss West Virginia Scholarship Pageant.

Debbie loved reading and studying the Bible, Praying for others, OU and Roll Tide Alabama Football, Nascar, All of her grandchildren, Hopping on a John Deere in the summer and mowing their acres, watching Nate’s football games and going to Dollywood and riding the roller coaster with Anna-Kate.

Survivors include:
Her Husband, Randy

She was preceded in death by her parents; 2 brothers John and Joe Davidson; 1 sister in law Margaret Davidson.

Funeral services will be 10 am Tuesday, February 21, at Believer’s Ministry Church, with Pastor Dalkey Davis presiding.

Visitation will be from 8am 9pm Monday, with the family present to greet friends from 5-7pm.

Memorial Contributions can be made to the American Cancer Society or American Parkinson’s Disease Association, in care of Brenneman Funeral Home, 1212 W 2nd St. Liberal, KS, 67901.

Condolences can be left at www.brennemanfuneralhome.com.

To order memorial trees or send flowers to the family in memory of Deborah Jean Schmitzer, please visit our flower store.