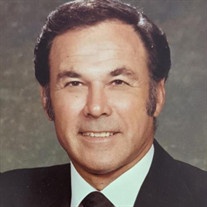 Dr. Donald Edwin Seibel, age 89, died Friday, September 3, 2021 at Banner Ocotillo Medical Center in Chandler, Arizona. He was born on August 10, 1932, the son of Edwin Seibel and Ana Gashler Seibel. Don graduated from Ellis High School in 1950 in Ellis, Kansas. He attended Fort Hays State University for 2 years, then transferring to Kansas State University before getting drafted. He served in the Army from 1953 to 1954. He later returned to K State to complete his doctorate degree in Veterinary Medicine in 1960. On April 25, 1964, he married Karen Hester in Perryton, Texas. He was the father of four sons; Eric, Scott, Stan and Matthew. Don worked as veterinarian for Dr. Phillips in WaKeeney, Kansas for 2 years and after went on to own and operate his own Veterinarian Clinic for 40 years. Don was an active member in the community belonging to the Liberal Country Club, Liberal Elks Club, the Knights of Columbus, the Kansas State Veterinarian Association, Kanas Veterinarian Medical Association (KVMA) and the American Veterinarian Medical Association (AVMA). He is survived by: His wife of 57 years, Karen Seibel of Chandler, Arizona Sons; Eric Seiblel of Dallas, Texas Scott Seibel and his wife Jo of Chandler, Arizona Stan Seibel and his wife Kerry of Jelm, Wyoming Matthew Seibel of Phoenix, Arizona Five Grandchildren, Nicholas, Brandi, Kyla, Zaden and Logan. Two Brothers, Darrell Seibel of Hays, Kansas and Jack Seibel of Peoria, Illinois One Sister, Carol of Phoenix, Arizona. Don was preceded in death by both his parents, Edwin and Anna Seibel, his brother David Seibel and one daughter, Heidi Ann Seibel. Visitation will be from 9:00am to 5:00pm, Friday, September 24, 2021 at the Hornung Family Funeral Home, 1212 W 2nd Street, Liberal, Kansas. Rosary will be at 7:00pm Friday, at the Hornung Family Funeral Home Chapel. Funeral Mass will be at 2:00pm Saturday, September 25, 2021, at St. Anthony of Padua Catholic Church, 1510 N Calhoun Ave, Liberal, Kansas with Rev. Juan Salas presiding. Interment will follow at the Restlawn Cemetery. Memorial Donations are suggested to the Alzheimer’s Foundation of America in care of Hornung Family Funeral home. Condolences may be sent to the family at www.hornungfuneralhome.com
To order memorial trees or send flowers to the family in memory of Donald Edwin Seibel, please visit our flower store.