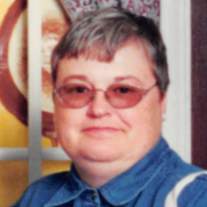 Edna Christine “Chris” Woodward 65, died August 8, 2016 at the Kansas Medical Center in Andover, KS.
She was born July 8, 1951 at Liberal, Kansas the daughter of Lonney & Claudette
(Crosby) Caffey. She was a lifetime resident of Liberal and graduated from Liberal High School. She was employed by the City of Liberal as the treasurer for 33 years. After her retirement she worked for Wal-Mart and later worked for the Liberal Convention and Tourism. She had been a member of the Southern Baptist Church. She had a love for making Crafts and helping animals.

She was preceded in death by her father Lonney Caffey.

Memorial service will be at 10:00 am Saturday at Brenneman Funeral Home Chapel with Rev. Stan Lehnert presiding. Cremation has taken place.

Memorial contributions may be sent to Angels for Animals or The American Diabetes Association in care of Brenneman Funeral Home 1212 W. 2nd Liberal, KS 67901.

To order memorial trees or send flowers to the family in memory of Edna Christine Woodward, please visit our flower store.