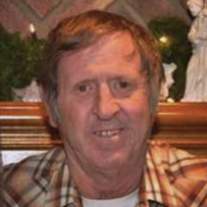 He graduated from Moscow High School in 1964.

He was a member of the Liberal Elks Lodge BPOE #1947. He enjoyed camping, gardening, playing pool and watching the Kansas City Royals and Kansas City Chiefs.

He married Guylene Downing on October 6, 1968 at Moscow, KS. She survives.

He was preceded in death by his parents, 2 Brothers Marvin Ragan and Jack Stoddard and 2 Sisters Mary Louise Glover and Katherine Ware.

Graveside Service will be held at 10:30 am Tuesday, September 27, 2016 at Moscow Cemetery, Moscow, KS with Patty Lahey, presiding. There will be a reception following the Graveside Service at 11:00 am at the Moscow United Methodist Church.

To order memorial trees or send flowers to the family in memory of Elven Ray Stoddard, please visit our flower store.