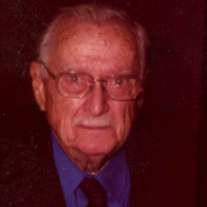 Emery Raymond Chaffin, 94, died Saturday, June 2, 2018 at Wheatridge Park Care Center.
He was born February 21, 1924 in Liberal, KS to George Washington Chaffin and Ida Bessie Packer Chaffin.
He graduated Liberal High School in 1943. He then attended Ottawa Baptist College for 3 years before entering the United States Army in 1948 and was granted an Honorable discharged in 1951. He served in Korea and Japan.
Emery married Miriam Murphy on April 3, 1965 in Liberal, KS.
He was a member of the Gideon’s, First Baptist Church, and Reapers Sunday School Class and was also a youth director for the church. The American Legion, VFW, Charter member Pancake Lions Club, past member of Kansas authors, Past President of Highway 83, Odd Fellows and Rebekah’s. He was a Troop #180 leader of the Boy Scouts. He was also a Red coat for the Liberal Chamber of Commerce.
Emery was a Poet. Miriam and he went to many Poets conventions down through the years. He also had a book of poetry published.
Emery owned the Chaffin Hardware Store on South Kansas for over 50 years.
Survivors: Wife Miriam Liberal, KS
Son Robert Edward (Robin Kay) Chaffin Liberal, KS
Daughter Elizabeth (Robert) Gant Liberal, KS
Sister Bess Levefer Kansas City, MO
Sister-In-Law Maxine Chaffin Stillwater, OK

Funeral services will be 2:00 pm, Friday, June 8, 2018 at the First Baptist Church, Liberal, KS, with Pastor Jason Ramsey officiating.
Military Honors will be at the church with American Legion, Lawrence M. Wimmer Post #80.
Cremation will follow the church service and a private Inurnment will be at a later date.
Visitation will be Thursday from 9:00 am to 8:00 pm with the family present from 6 to 8 pm at the Brenneman funeral Home Chapel.
Memorials may be made to the Gideon’s or the First Baptist Church. To send the family concolences please visit www.brennemanfuneralhome.com

To order memorial trees or send flowers to the family in memory of Emery Raymond Chaffin, please visit our flower store.