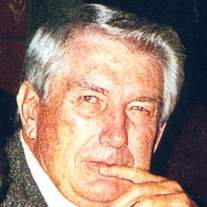 Gary Max Mendenhall, 80, died Friday, November 4, 2016 at his home in Edmond, OK.
Max was born on January 6, 1936 to Carl and Dolores (Thurman) Mendenhall on a farm south of Baker, Oklahoma.
He attended school in Baker and graduated from Eureka High School with class of 1954.
On July 21, 1956 was united in marriage to Lois Jean Hart at the Pershing Avenue Christian Church of Liberal, Kansas. They celebrated 60 years of marriage on July 21, 2016. Max was a member of the Tyrone Baptist Church and the National Cattlemen Association.
He was a farmer and rancher all his life. In 1987 Max, along with partners from Kansas bought the feed yard south of Turpin, Oklahoma. The expanded and reopened, as the Tri State Feeders. In 1992, he sold his part and devoted full time to expanding the farming operations which included irrigation farming and purchasing land. He continued to feed cattle at several area feed yards in Kansas, Texas and Oklahoma. Then in 1996 he decided to move from Baker to Liberal where he lived until 2003 when he retired from farming and moved to Oklahoma City, OK. In 2010 they moved to Edmond, OK.
He enjoyed seeing his grandchildren. He was an avid sport fan, enjoyed watching the Oklahoma City Thunder basketball along with OU and OSU football.
He is survived by his wife Lois, and three sons, Tracy Mendenhall of Okarche, OK, Randy Mendenhall of Edmond, OK. Jamey and wife Missy of Broomfield, CO. Two brothers Dean Mendenhall and wife Elizabeth of Whitesboro, TX and Jack and wife Carol Ann Mendenhall of Buhler, KS.
Also four grandchildren Matt Mendenhall and wife Cristina of Lake Havasu City, AZ., Mike Mendenhall and wife Kristi of McCook NE., McKenna Mendenhall and Bailey Mendenhall of Broomfield, CO. Two great-grandsons, Landry Mendenhall and Maddox Mendenhall of McCook, NE and a great granddaughter Brooklyn Mendenhall of Lake Havasu City, AZ. Along with many nieces and nephews.
He was preceded in death by his parents Carl and Dolores Mendenhall.
Funeral services will be 2:00 pm, Wednesday, November 9, 2016 at Brenneman Funeral Home and Cremation Services Liberal, KS, with Charlie Sappington officiating.
Burial will be in Tyrone Cemetery, Tyrone OK.
Memorials may be made in Max’s name to the Tyrone Cemetery in care of Brenneman Funeral Home and Cremation Services 1212 W. 2nd St. Liberal, KS. 67901.
To send condolences to the family please visit www.brennemanfuneralhome.com

To order memorial trees or send flowers to the family in memory of Gary Max Mendenhall, please visit our flower store.