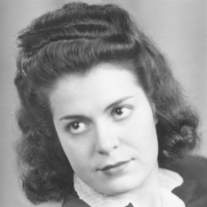 Gladys Nadine Blasi died on Sunday, October 2, 2016, at Glendale Adventist Hospital in Glendale, California after a brief illness. She was 93. She was born Gladys Lambert on July 22, 1923 in Guymon, Oklahoma, the youngest of the five children of John and Alma Lambert. Her father was both a farmer and an ordained and practicing minister of the gospel. Her family lived on farms in the heart of the Dust Bowl through the 1930’s. Gladys was one of 13 graduating from Kismet, Kansas High School in 1942. She and her parents moved to Liberal not long thereafter.
In 1943, Gladys met and married the love of her life, John Blasi, just before he shipped overseas as a Navy seaman. She and John had two children, Gary (born 1945) and Ricky (born 1951). Ricky was born with Down’s syndrome and was a joy to the family. Gladys became and remained a full time caregiver and homemaker. After John’s retirement and two years spent touring the Western United States, the family settled in Hemet, California. Gladys’ 70-year marriage to John Blasi ended with his death in 2013. Her ashes will be buried next to his and those of their son Ricky, who died in 1998.
Gladys Blasi leaves to mourn her loss:
• Son Gary Blasi of Los Angeles
• Grandson Michael, wife Beth and great-granddaughter Myla, of Los Angeles
• Grandson Jeremy and wife Nancy, of Los Angeles
• An extended family of cousins, nephews and nieces, in-laws, and dear friends in Kansas, Oklahoma, Colorado and California
Services will be conducted on October 22, 2016 at 3pm at the Brenneman Funeral Home Chapel.
Burial will be at the Liberal Memorial Cemetery.
In lieu of flowers, donations in memory of Gladys may be made to the Michael J. Fox Foundation for Parkinson’s Research in care of the Brenneman Funeral Home and Cremation Services 1212 W. 2nd St. Liberal, KS 67901
Condolences may be sent to the family at www.brennemanfuneralhome.com

To order memorial trees or send flowers to the family in memory of Gladys Nadine Blasi, please visit our flower store.