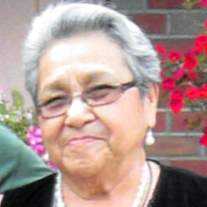 She was born on October 23, 1937 in Guatemala, the daughter of Jose De La Cruz and Maria E. Carranza.
She married Manuel Salazar in Guatemala. He preceded her in death on March 21, 2012.
Gloria worked at the Holiday Inn and La Fonda.

She was preceded in death by her mother, father and husband.

Visitation will be from 11am to 5pm, Thursday, January 2nd, at the Brenneman-Hornung Family Funeral Home. Rosary and vigil will be at 7pm at St. Anthony of Padua Catholic Church.
Funeral Mass will be at 10am, Friday, January 3 at St. Anthony, with Father Ted Stoecklein presiding.
Burial to follow at Restlawn Cemetery.

To order memorial trees or send flowers to the family in memory of Gloria E Salazar, please visit our flower store.