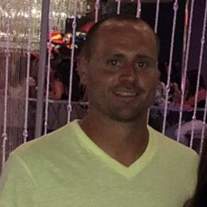 He was born December 31, 1987 in Blue Springs, Missouri to Donald Owens and Judy Owens (Stewart).

He married his best friend Holly (Turpin) Owens on December 13, 2014 in Liberal, KS. They were married for nearly 4 years.
He worked for Hog Slat as a Site Supervisor.

His most passionate hobby was spending time with his family, but Grady enjoyed golfing, building and fixing things.

Visitation will be Wednesday, October 10, 2018 from 5:00 to 8:00 PM at Brenneman Funeral Home Chapel with family present to greet friends and family.

Funeral Services will be private for family only.

To order memorial trees or send flowers to the family in memory of Grady Owens, please visit our flower store.