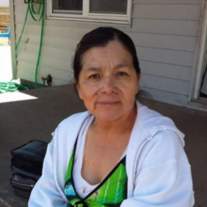 On June 1, 1976 she married Tomas Bautista at Chimaltitan, Jalisco, Mexico. He survives.

She was employed at Tyson Foods as the knife supervisor.

She was preceded in death by her parents.

Rosary will be at 9:00 am followed by the Mass of Christian burial at 10:00 am, Monday, February 19, 2018 at St. Anthony of Padua Catholic Church in Liberal, KS, with Fr. James P. Dieker officiating. Burial will be in the Family Cemetery in Mexico.

To order memorial trees or send flowers to the family in memory of Irene Bautista, please visit our flower store.