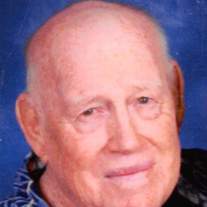 On December 20, 1953 he married Sharon R. Hampsten at Clayton, NM. She survives.

He worked for Liberal Gas Company for 40 years, retiring as Construction Superintendent.

He was a member of the Grant Street Church of Christ, he was a Liberal Fire Department Volunteer for 20 years, coached Kids Inc. for 10 years, played softball for the City Softball League until age 55, and he then umpired for the City Softball League for 15 years. He delivered and picked up cars for Stu Emmert’s Automotive Center for 15 years. He spent the winters in South Texas. He enjoyed spending time at the family cabin in Cuchara, CO and having morning coffee with his friends at McDonalds.

He was preceded in death by his Parents, 1 Son Billy Joe Houseman and 2 Sisters Julia Manhart and Laura Gorden.

Cremation has taken place and there will be no viewing or visitation.

Memorial Service will be held at 2:00 p.m., Wednesday, October 25, 2017 at the Grant Street Church of Christ in Liberal, KS with Minister Dennis (Skip) Francis presiding.

Memorial contributions may be sent to the American Cancer Society in care of the Brenneman Funeral Home 1212 W. 2nd Liberal, KS 67901.

To order memorial trees or send flowers to the family in memory of J D Houseman, please visit our flower store.