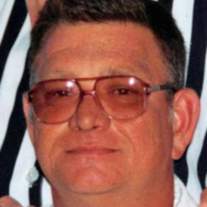 He was born on June 12, 1952 in Victoria, Texas.
the son of James V. Armstrong Sr. and Ruthie Lea (Martin) Armstrong

They were married for 49 years.

He was a member of the NRA and Church of God. He worked for Halliburton Service as a Special Tools Operator for 38 years. He retired on June 1, 2008. James enjoyed many hobbies including working on race cars and racing motorcycles. When he wasn’t home, he was usually out watching his grandchildren play sports.

James Jr. was also preceded in death by his parents and two sisters.

Visitation will be on Sunday, January 6th, 2019 at Brenneman Funeral Home from 2-5PM with family present to greet friends 4-5PM.

Funeral Services will be on Monday, January 7th , at 10AM at the Brenneman Funeral Home Chapel.
Reverend Jeff Mitchell presiding. Burial to follow at Liberal Cemetery.

To order memorial trees or send flowers to the family in memory of James V. Armstrong, please visit our flower store.