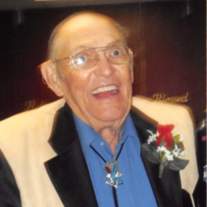 He was born February 10, 1933 in Baca County, Colorado to Thomas Calvin and Mary Eliza (Black) Duncan. He graduated from Hugoton High School in 1951 and married Phyllis Jeanne Nordyke on December 14, 1951 in Hugoton, Kansas. They were married for 53 years. Phyllis passed away on March 20, 2005.
John worked for Northern Natural Gas as an area dispatcher for almost 40 years, retiring in 1993.

He was a member of the First Baptist Church of Liberal.

John was a 48 year member of the Masonic Lodge and was Master in 1976.

Funeral Services will be Thursday, September 27th at 2:00pm at the First Baptist Church of Liberal, 204 N. Sherman Ave., Liberal, Kansas. Pastor David Bagwell presiding.
Interment will be in the Hugoton Cemetery, Hugoton Kansas. There will be a Masonic graveside service by Hugoton Masonic Lodge # 406 AF&AM.

To order memorial trees or send flowers to the family in memory of John Henry Duncan, please visit our flower store.