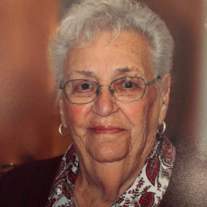 June Verlee Hardin, 90, died Wednesday, May 22, 2019 at the Good Samaritan Society in Liberal.
She was born on June 4, 1928 in Avalon, MO, the daughter of Albert Perry and Olive Verlee (Cunningham) House.
June attended Strandberry High School in Stranberry, MO.
On December 29, 1945, she married Richard McKenny Hardin in Troy, KS. He preceded her in death on March 21, 2003.

June was preceded in death by her parents, her husband, 1 sister; Larene Arnold, 1 granddaughter, 1 great-granddaughter, and 1 son in law; David Hall.

To order memorial trees or send flowers to the family in memory of June Verlee Hardin, please visit our flower store.