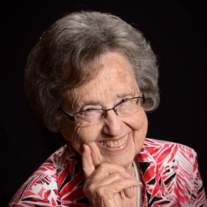 Lanora Lucille Webb, 92, entered into glory on Saturday, April 1, 2017 at Southwest Medical Center on what would have been her 72nd wedding anniversary.
She was born April 25, 1924 at Hugoton, Kansas to Haven and Callie (Reese) Stevens. Lanora and Delmer began dating while Lanora was still in high school. Delmer was drafted into the army, and left for World War II, but not without asking Lanora to wait for him. He secured the request with a ring. She graduated valedictorian from Hugoton High School in 1941. Lanora worked for Citizen’s State Bank in Hugoton while she waited. After four long years, Delmer finally came home. They were married on Easter Sunday, April 1, 1945. To this union were born 4 boys and 1 girl, Howard, Darrel, Arden, Keith and Lora. Delmer preceded her in death in 1994.
Before she was married, Lanora was the State Treasurer of the Business and Professional Women. While the boys were still at home, she was an active community leader for 4-H. She was an avid gardener and known for her fabulous cooking. At fair time, she won many ribbons for her garden produce and baked goods. Delmer joined the Gideons in 1958 and Lanora was an active member of the Gideon Auxiliary.
Lanora’s faith was the basis of her life. The first time she taught Sunday School, she was 18 years old. Delmer and Lanora joined First Baptist Church in 1954. She taught 7th grade girls Sunday School until Delmer died. Then she began teaching the Friendly Class, which had been taught by Delmer for many years, until she was 89 years old.
Survivors include 4 children: Howard (and Laura) Webb of Waxahachie Texas, Darrel (and Rozelle) Webb of Liberal Kansas, Arden (and Glenda) Webb of Hugoton Kansas and Lora Jones of Liberal; seven grandchildren: Ryan (and Jenny) Webb of Gilmer, Texas; Aaron (and Candy) Webb of Red Oak, Texas; Molly (and Chris) Scott of Midlothian, Texas; Darren (and Emily) Webb of Valley Center, Kansas; Jared (and Alisha) Webb of Baxter Springs, Kansas; Gabriel Webb of Riverton, Kansas; Joshua (and Paris) Webb of Galena, Kansas, fifteen great grandchildren and many nieces and nephews.
Lanora was preceded in death by Lora’s family: J. L., Janessa and Jayden Jones. In the years following the accident, Lanora embraced Lora’s “adopted” family. She is blessed to be called grandma by many, including: Teresa (and Adam) Robertson of Enid, Oklahoma; Roger (and Rachel) Chronister of Tyrone, Oklahoma; and Will Walker of Wynnewood, Oklahoma. She also loved being called mom by another daughter: Brenda Headrick.
Lanora was also preceded in death by her parents, her brother Glenn Stevens, an infant son Keith, and a great granddaughter, Shelby Webb.
The service will be held Saturday, April 8 at 2:00 p.m. at First Baptist church, 3rd and Sherman, with Pastor Jason Ramsey officiating. Following the funeral, there will be a graveside service at Restlawn Memorial Gardens, 4 miles north of Liberal at Highway 83 and Road 9. Friends may call at Brenneman Funeral Home on Friday, April 7, 9:00 AM - 8:00 PM. Family will be present to greet friends from 6:00 - 8:00 PM.
Memorials are suggested to First Baptist Church or Gideons International in care of Brenneman Funeral Home, 1212 W. 2nd Street Liberal, Kansas.

To order memorial trees or send flowers to the family in memory of Lanora Lucille Webb, please visit our flower store.