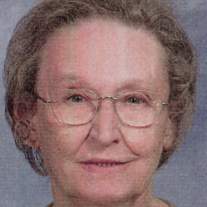 She was a homemaker. She was a member of the Grace Evangelical Lutheran Church.

She was preceded in death by her parents and 1 Sister and 2 Brothers.

Funeral service will be 10:00 Am., Tuesday, December 11, 2018 at Grace Evangelical Lutheran Church with Pastor Andrew Wehling, presiding. Burial will be in the Liberal Cemetery, Liberal, KS.

Visitation Monday December 10th from 9 am to 7 pm, at Brenneman Funeral Home with Family present from 5 to 7.

Memorial contributions may be sent to the Grace Evangelical Lutheran Church in care of the Brenneman Funeral Home 1212 W. 2nd Liberal, KS 67901.

To order memorial trees or send flowers to the family in memory of Lena Mae Swanson, please visit our flower store.