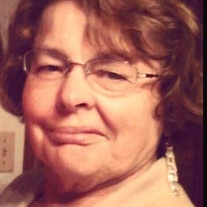 Lorene Reever, age 75, died Friday, July 23, 2021, in Hobbs, New Mexico. She was born June 27, 1946, the daughter of Forest Trahern and Leona Isaccs Trahern in Liberal, Kansas. Lorene graduated Liberal High School in Liberal, Kansas in 1964. She was very hard working starting her first job at Dairy Queen while she was in high school. She later worked for Panhandle Eastern as a secretary and for K-Mart from when they first opened until they went out of business. She then worked at Dillions before she retired. She spent her time crocheting and working in the flower garden and vegetable garden. Lorene enjoyed riding and training horses. She also enjoyed reading romance novels and watching western, romance and comedy movies with her grandchildren. Lorene was a master cook in the kitchen, canning and baking an assortment of cookies, pies, and cakes. She always enjoyed preparing a big holiday meal to be shared with the whole family. Lorene attended all the sporting activities her children and grandchildren were involved in. Her memberships included the Original Town of Liberal and the Housing Authority Board. Lorene will be dearly missed and forever in our hearts. Survived by: Two sons, Daniel (Vanessa) Reever and Dustin Reever, both of Liberal, Kansas Her daughter, Korinna (Frank) Velasquez of Andrews, Texas Her brother, Dick (Barbara) Trahern of Oklahoma And seven grandchildren, Dakota, Robbie, Eddie, Kylar Velasquez, Angelique, Jennifer, Alexander Reever Lorene was preceded in death by Her parents Forest and Leona Trahern One brother Dale and wife, Betty Trahern One sister, Donna Moody Visitation will be 4:00 PM – 6:00 PM Tuesday, July 27, 2021, at the Hornung Family Funeral Home 1212 W. 2nd Street Liberal, Kansas Funeral Service will be at 10:00 AM Wednesday, July 28, 2021, the Hornung Family Funeral Home Chapel 1212 W. 2nd Street Liberal, Kansas Rev. Mike Isaacs presiding. Interment will follow at the Restlawn Cemetery. Memorial donations suggested to Crossroads Therapeutic Riding Center in care of Hornung Family Funeral Home. Condolences may be sent to the family at www.hornungfuneralhome.com
To order memorial trees or send flowers to the family in memory of Lorene Reever, please visit our flower store.