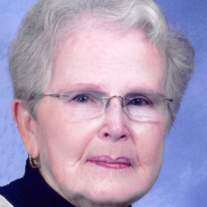 Margaret Pearle Engler 94 died, Thursday December 7, 2016 at Brookdale/ Liberal Springs Senior Living Center. She was born May 9, 1922, and at birth became the daughter of Willard and Lillian (Frey) Moody. She was made available for them to adopt at birth, and at the age of 66, she discovered her biological family. She has been a resident of Garden City and Haskell County most all of her life and only living in Liberal for the past year. She was the last surviving Charter Member of the First Assembly of God Church in Garden City, KS. She was a homemaker and farmwife. On December 28, 1939 she married William S. Engler in Finney County, KS. He died November 11, 2011.
Survivors include:
2 Sons: William Engler and wife Judy Garden City, KS
Rev. Terence “Terry” Engler and wife Brenda Liberal, KS
1 Daughter: Charlotte Ziemer and husband Robert Georgetown, Texas
1 Brother: Ralph Blount Brighton, CO
2 Sisters: Dorothy Fields Wichita, KS
Lois Conklin Goldsboro, OK
6 Grandchildren: Dennis Ziemer; Chad Ziemer; Trent Engler; Tera Harvey; Trisha Nelson; Tiffany Pridmore. 17 Great Grandchildren and 4 Great Great Grandchildren.
She was preceded in death by her parents, and several brothers and sisters.

Funeral Service will be held at 10:00 am Monday at the Trinity Faith Church in Liberal with Pastor Arnold Wheatley presiding. Burial will be at 2:00pm Monday at the Valley View Cemetery in Garden City, KS.
Visitation time will be held from 4pm to 7pm Sunday at Brenneman Funeral Home.
Memorial contributions may be sent to the Trinity Faith Church in care of Brenneman Funeral Home & Cremation Services 1212 W. 2nd St. Liberal, KS 67901

To order memorial trees or send flowers to the family in memory of Margaret Pearle Engler, please visit our flower store.