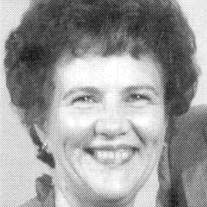 She was born on May 19, 1932 in Lyndon, Kansas, the daughter of Carl Peter and Leona (Toulouse) Eklund.
She graduated from High School in 1950 in Phillips, TX. She graduated in 1976 from Frank Phillips Junior College, with a degree in nursing.

She worked for many years as an LPN in the operating room at SWMC, retiring in 1991. She was a member of First United Methodist Church, United Methodist Women, Mothers Club, and the Book Review Club.

She was preceded in death by her parents, her husband, her daughter Carla Marie Prentice, an infant great grandson Reed Zibilski, and a brother in law, Clyde Mertz.

Funeral services will be 10:00 am, Saturday, May 5, 2018 at the First United Methodist Church with Pastor Keith Anglemyer presiding. Burial at Liberal Cemetery to follow.

Visitation will be Friday, May 4th from 9am to 8pm at the Brenneman Funeral Home Chapel. Family will be present to greet friends from 6 to 8pm.

To order memorial trees or send flowers to the family in memory of Margaret Caroline Prentice, please visit our flower store.