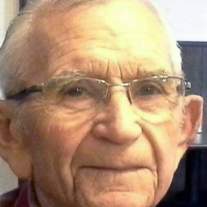 Martin E. “Bud” Banning 88, died Friday, Oct. 14, 2016 at Southwest Medical Center in Liberal, KS He was born Nov. 28, 1927 in Chautauqua County, KS, the son of Lonzo A. and Veora A. (Jackson) Banning. He was a longtime resident of the Tyrone Area.
He was employed in Pipeline Construction for the Oil and Gas industry.
On September 2, 1947 he married Patricia McCabe in Wichita, Kansas. She died April 15, 2010.

He was preceded in death by parents, 3 brothers and 1 sister, 2 grandchildren and 1 great grandchild.

Funeral Service will be held at 2:00 pm Monday at the Tyrone High School Auditorium with Bill Nichols, Sr. presiding. Burial will take place in Tyrone Cemetery.

Visitation time will be from 3 pm to 5 pm, Sunday, October 16, with the family present to greet friends during that time.

Memorial Contributions may be made to the Tyrone Public Schools, in care of Brenneman Funeral Home, 1212 W 2nd Street, Liberal, KS 67901. Condolences may be sent to the family at www.brennemanfuneralhome.com

To order memorial trees or send flowers to the family in memory of Martin "Bud" Banning, please visit our flower store.