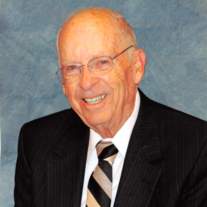 Merle Wilfred Staats, age 96, died Wednesday, May 16, 2018 at Homestead Estates Home Plus in Liberal, KS. He was born January 23, 1922 in Hutchinson, KS, the son of Gasper Gordon and Mary J. (Casteel) Staats. He grew up on a farm near Woodward, OK, where he attended school and graduated from High School.

He attended Business College at Wichita, KS. He entered the U. S. Coast Guard and served overseas in the Pacific area during WWII from 1942-1946. Upon his discharge, he married Eva Juanita Wells on September 7, 1946 at Kansas City, KS. She died on August 20, 2010.

Merle graduated from the Kansas City School of Watchmaking in 1947, under the G. I. Bill. Following his graduation, he and his wife moved to Salina, KS where he worked in a jewelry store for a short period of time.

In 1948, he and Juanita came to Liberal where they were offered two positions. Merle went to work for Wilkins Jewelry Store as a watchmaker, and Juanita worked for Jack Moore as secretary at the Liberal Gas Company.

Mr. Wilkins operated the store as Wilkins Jewelers & Optometrists until he sold the store in 1955 to Merle and Juanita Staats. The store served the Rock Island Railroad as Watch Inspector during all those years. The railroad operated their division point office here.

Mr. Staats operated the store the first two years under the good name of Wilkins before changing the name to Staats Jewelers in 1958. After 39 years under their ownership, they decided to retire and pass the business to their youngest son, Brent, who has carried on the Staats name known for their honesty, integrity and fair dealing.

He is also survived by his caregiver and friend, Carolina Pereda.

He is preceded in death by his Parents, 4 Brothers Harold, George V., Leo and Maurice Staats, 2 Sisters Juanita Lehman and Hazel White.

Funeral Services will be 10:00 am, Monday, May 21, 2018 at the First United Methodist Church in Liberal, KS. Burial will be in the Liberal Cemetery with Pastor Keith Anglemyer presiding.

Visitation will be 1pm-6pm Sunday, May 20 at Brenneman Funeral Home with the family present to greet friends from 4-6.

Memorial contributions may be sent to the First United Methodist Church or the Alzheimer’s Association in care of the Brenneman Funeral Home 1212 W. 2nd Liberal, KS 67901.

To order memorial trees or send flowers to the family in memory of Merle Wilfred Staats, please visit our flower store.