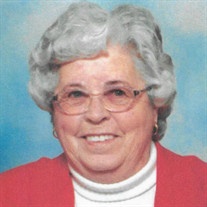 Norma Jean Isaacs, age 91. Died July 15, 2021, at Brookdale Liberal Springs in Liberal, Kansas. She was born on August 22, 1929, the daughter of Carl Wettstein and Hazel Massoni Wettstein in Stevens County, Kansas. Norma graduated from Liberal High School in 1947. She married Elmer Isaacs on June 29, 1949. Elmer preceded her in death on May 26, 1997, after 47 years of marriage. Norma and Elmer were lifelong farmers in the Adams, Oklahoma area. Norma’s hobbies included crochet and quilting. She was highly active in the church working in the church library and in the office folding bulletins. Norma attended church faithfully until about 6 years ago but enjoyed listening to the service recordings for the last few years. Norma was a very loving Aunt and an Honorary Grandmother, “Grandma Jean”. She was preceded in death by her husband, Elmer Isaacs Both her parents, Carl and Hazel Wettstein Her brother, Wendell Wettstein Her nephew, Orville Isaacs Norma is survived by her brother, Wayne Wettstein, her special nieces, Lorene Reever and Reita Isaacs along with numerous other nieces and nephews. No visitation is scheduled. Funeral Service will be at 10:00 AM on Wednesday, July 21, 2021at the Hornung Family Funeral Home 1212 W. 2nd Street Liberal, Kansas Rev. Mike Isaacs presiding. Interment will follow at the Liberal Cemetery. Memorial donations suggested to First Southern Baptist Church or Cal Farley’s Boys Ranch in care of Hornung Family Funeral Home. Condolences may be sent to the family at www.hornungfuneralhome.com
To order memorial trees or send flowers to the family in memory of Norma Jean Isaacs, please visit our flower store.