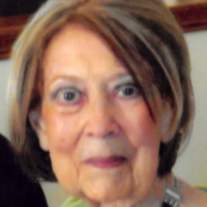 Peggy Holt left this world at her home in Wichita, KS. on August 30, 2016 surrounded by her three loving daughters. Peggy lived in Rural Seward County until moving to Liberal in October of 1984. She moved to Wichita in 2002 to be near her family.
She was born on February 12, 1928 to Riffe and Hazel (Lowry) Wesley in Tyrone, Oklahoma where she graduated from Tyrone High School. Peggy married Bill Holt on January 12, 1947 in Liberal, Kansas. Peggy was a member of the First Baptist Church in Liberal and a former member of the General Federation of Women’s Club in Moscow, Kansas as well as a member of the Hugoton, Kansas China Palettes Club.
Survivors are:
Daughters Connie Holt, Austin, TX,
Rhonda Holt, Wichita KS,
Marla Branch and her husband Keith, Seattle, WA,

Two granddaughters Allegra Joyce Branch, and Alexa Grace Branch, of Seattle, WA,
One brother Bill Wesley, Wickenburg, AZ,
One sister-in-law Pat (Mrs. Bob) Wesley, Liberal, KS,
One step sister Dorothy Saffeels, Arvada, Co,
And many special other relatives, nieces, nephews and the cherished friendship of many friends.
Peggy is preceded in death by her husband, Bill Holt who died on March 26, 1996, her parents and her brother Bob Wesley.
Graveside service will be at Restlawn Cemetery in Liberal, KS at 10:00 am Satuday, September 3rd, with Pastor Gregg Turpin presiding.
Visitation will be at Brenneman Funeral Home on Friday, September 2nd from 6:00 pm to 8:00 pm.
In lieu of flowers, the family requests memorial donations to The America Heart Association or the Harry Hynes Memorial Hospice (313 S. Market, Wichita, KS 67202) in care of Brenneman Funeral Home 1212 W 2nd St, Liberal, KS 67901.
Condolences may be sent to the family at www.brennemanfuneralhome.com

To order memorial trees or send flowers to the family in memory of Peggy Joyce Holt, please visit our flower store.