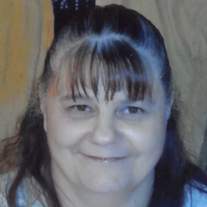 Peggy Sue Quinones, 55, died Tuesday, December 11, 2018, at Southwest Medical Center in Liberal. She was born on March 27, 1963, the daughter of William Chestnut and Beverly Barber.

She graduated from Mead High School in 1981.

She enjoyed spending time with her family, especially her grandchildren.

Peggy worked as a department manager at Wal Mart.

Memorial Services will be Saturday, December 15, 2018, at 2 pm at the Brenneman Funeral Home Chapel, with Pastor Rex Petty presiding.

Memorial contributions may be sent to the Funeral Home, to help with Peggy’s final expenses, in care of Brenneman Funeral Home 1212 W. 2nd Liberal, KS 67901.

To order memorial trees or send flowers to the family in memory of Peggy Sue Quinones, please visit our flower store.