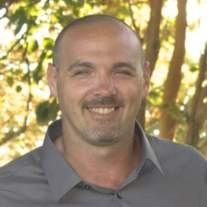 Relis Carl Eastman III, passed away in Walnut Creek, CA on Thursday, June 30, 2016 at the age of 44. He was born June 27, 1972 in Liberal, KS to Carl and Virginia (Radzun) Eastman. He married Kathleen Rogneby in Liberal, KS on March 29, 1998. They were blessed with a large family. Three daughters, Aurora, Rebecca, and Amia. Two sons Andrue and Scott.

Relis is survived by his child, his wife, and his mother. Also, surviving are three sisters, Mary (Javi), Ana (Dean), and Carla (David). Various nieces and nephews.

He was proceeded in death by his father and sister Kathy.

Relis joined the Army and proudly served his country from 1992 to 1996. After leaving the services he found his true love, his job as a DSL technician with AT&T where he made many long lasting and unforgettable friendships.

Relis's bright blue eyes and contagious smile will be greatly missed. His family knows he will be waiting to greet them with his usual "How's it goin'?"

Cremation has taken place and a private family inurnment will be held in Restlawn Cemetery, Liberal, Kansas

To order memorial trees or send flowers to the family in memory of Relis Carl Eastman, please visit our flower store.