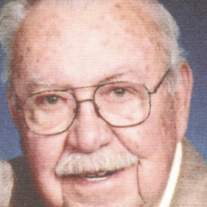 He was born March 25 1927 to Oren Victor Faucett and Golda Irene Kirtland Faucett in Alamosa, CO.

Richard graduated from Alamosa High School in 1946. He served in the United States Navy in World War II from April 1944 to August 1945.

He was employed by FMC Manufacture as a purchasing agent. He was a member of the SCCC Booster Club.

He is survived by his wife.

He is preceded in death by his parents; brother in law, Larry Barlogi; daughter, Jory Darlene Sydlaske; and grandson Jerod Faucett.

Services will be 11:00AM on Tuesday October 22, 2019 at First Christian Church-Disciples of Christ.

Memorials may be made out to the Commemorative Air Force or Mid-America Museum in care of Brenneman Funeral Home 1212 W. 2nd Street, Liberal, Kansas 67901. Please feel free to leave condolences or share memories at www.brennemanfuneralhome.com

To order memorial trees or send flowers to the family in memory of Richard Oren Faucett, please visit our flower store.