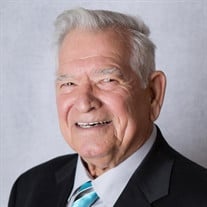 Ronnie Eugene Brant, Sr., 83, passed away on Thursday, July 21, 2022, at Southwest Medical Center in Liberal, Kansas. He was born August 7, 1938, on a farm in Yuma County, Colorado, the son of Albert L. and Velma (Prather) Brant, Sr. He attended elementary school in Denver, Colorado. While in Denver, he acquired rheumatic fever. It was finally cured, when his mother signed a consent giving permission for him to be treated with a new experimental drug. The family then moved to a dairy farm near Lebanon, Missouri. It was thought that the climate there was more beneficial for his health. Ronnie attended rural one room schools near Delto, Missouri. Ronnie enlisted and served in the U.S. Navy during the Korean conflict having duty on the Aircraft Carriers, USS Benington, USS Forrestal, and the USS Independence in Fighter Squadrons 21 and 41 as an aircraft mechanic. After being honorably discharged from the Navy, he began his trucking career. He was a driver and then leased trucks to several companies. Finally in 1995, Ronnie started his own trucking company, R. Brant Trucking. He retired in 2010 after more than 50 years of trucking. He made many friendships during his time on the highway. During brief periods when he got off the road, he made a living as a diesel mechanic. On August 4, 1988, he married Debbie Dawkins in Liberal, Kansas. She survives. He loved country music, fishing, target shooting, and taking care of his lawn and garden. After he got off the road as a trucker, he and Debbie bought an RV so they could continue to travel the US together with their fur-baby children. He was preceded in death by his parents, two brothers, Albert (Sonny) Brant, Jr. and Vernon Brant, and one sister, Carolyn Williams. Visitation will be Wednesday, July 27, 2022, from 5:00 pm to 7:00 pm at the Hornung Family Funeral Home, 1212 W. 2nd Street, Liberal, Kansas. Family will be present to great friends and celebrate Ronnie’s Life during that time. Burial will take place Thursday, July 28, 2022, at 10:00 am at the Bucklin Cemetery in Bucklin, Kansas. Memorial Donations are suggested to Bucklin Cemetery Beautification fund in care Hornung Family Funeral Home, 1212 W. 2nd Street, Liberal, Kansas. Condolences may be sent to the family at www.hornungfuneralhome.com Hornung Family Funeral Home, 1212 W. 2nd Street, Liberal, Kansas
To order memorial trees or send flowers to the family in memory of Ronnie Eugene Brant, please visit our flower store.