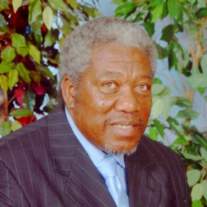 Roosevelt “Lucky” Livingston, 73, died Tuesday, December 13, 2016 at his residence in Liberal, KS. He was a resident of Liberal for 57 years.

He was born on May 8, 1943 to Leroy and Gertie (Lewis) Livingston in Pickens, Arkansas. He attended Liberal High School.

On January 6, 1966 he married Gertrude (Witherspoon) Livingston. She survives.

Roosevelt worked for Williams Field Service as an oilfield well technician, Ideal Bakery a baker, and owned and operated his own business, Super Clean Janitorial Service for 7 years.

He was a member of Bibleway Church Of God In Christ, Deacon Board, Trustee Board and Sunday School Superintendent.

Funeral Services will be Friday, December 23, 2016 at 11:00 at the First Southern Baptist Church, Liberal, with Pastor Walter Witherspoon presiding. Graveside services to follow at Liberal Cemetery with Military honors provided by the United States Navy.

Visitation will be from 1-5pm Wednesday, and 9am – 8pm Thursday.

To order memorial trees or send flowers to the family in memory of Roosevelt "Lucky" Livingston, please visit our flower store.