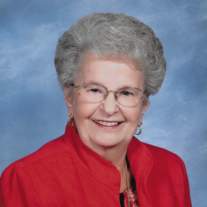 Ruby Maxine (Vail) Hamm died Wednesday, January 18, 2016 at the Brookdale Liberal Springs in Liberal, KS, at the age of 91 years.
Ruby was born October 29, 1925, at Plains, KS, the twin daughter of Olus and Myra (Klein) Vail. She attended school in Plains, Kansas graduating with the class of 1943.
Ruby married Joyce L. Hamm on November 13, 1944 in Alameda, California. He died March 17, 1982. To this union were born two sons, Terrence L Hamm and Michael L Hamm.
After Joyce was discharged from the Navy, they made their home south of Plains where they were engaged in farming. They also owned and operated The Hamm Agency selling insurance and real estate.
Ruby and Joyce were vital in the development of the Joyce Hamm Golf Course and the housing development in Plains.
Ruby was very active belonging to the B42 Bridge Club, Order of the Eastern Star, a member of the Plains City council, a member of the Joyce Hamm Golf Course, a former member of the Board of Directors at Plains State Bank and the United Methodist Church of Plains.
Those preceding her in death are her husband, Joyce, her parents, and her twin sister, Ruth Geisinger.
Survivors include her sons, Terrence of Liberal, Mike and his wife, Jacque of Jenks, OK, four grandchildren, Kerry Terry of Blue Springs, MO, Trey Hamm and his wife, Amanda of Colorado Springs, CO, Scott Hamm and his wife, Donna of Virginia Beach, VA, and Hollie Roesch and her husband, Mark of Glenpool, OK. Great grandchildren, Keeston, DaShaughn, and Kenzie Terry, Julianna, Allie, Talor, and Rylan Hamm, Makayla and Logan Hamm, and Kade and Jocelyn Roesch and several nieces and nephews.
Memorial service will be 11:00 a.m., Wednesday, January 25, 2017 at the United Methodist Church in Plains, KS with Rev. Larry Myers, presiding. A private family burial will be held in the Plains Cemetery.

Memorial contributions may be sent to the Joyce Hamm Golf Course or charity of donor’s choice in care of the Brenneman Funeral Home 1212 W. 2nd Liberal, KS 67901.

To order memorial trees or send flowers to the family in memory of Ruby Maxine Hamm, please visit our flower store.