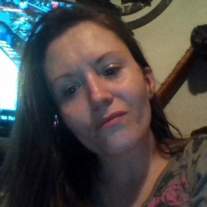 Sara Jean Herd (Chappell), 32, died Thursday, December 1, 2016 at Southwest Medical Center in Liberal. She was born on December 20, 1983 to Sammy and Leslie Annette (Durbin) Chappell in Liberal, KS. She attended Southwestern Heights High School, and later went on to get her GED. She worked as a Home Aid for Home Heath for several years.

She was preceded in death by her parents; Uncle Jim Chappell, Grandpa Lester Durbin, and Grandma Fanny.

Cremation has taken place, and there will be no public visitation.


Condolences may be sent to the family at www.brennemanfuneralhome.com

To order memorial trees or send flowers to the family in memory of Sara Jean Herd, please visit our flower store.